I spent an evening a few nights ago watching a truly awful movie. The movie was panned by critics but eventually did produce a profit at the box office. Go figure?

The movie was called 'The Conqueror' (1956) and it starred John Wayne as the Mongol warrior Genghis Khan. He was terribly miscast, imagine someone who is very tall and talking with a very strong American accent trying to portray a short Chinese man. Ben Mankiewicz of Turner Classic movies, who introduced the film, said it was one of the worst movies made during the 1950s. He was right!

But there was one scene that caught my attention. A Shaman read the future using a long string of beads. I loved this piece of jewellery and since it was such a short scene, I imagined what kind of beads must have been on his string.

I was inspired to try and create something that looks similar to the string of beads used by the Shaman. My combination of beads includes horn, antler, gemstones, copper, silver, coral, ...

It is fascinating to me to read about these powerful necklaces and their use in so many cultures. Physical proximity does not seem to have any influence on the use of these amazing pieces.

I think I will try another one soon. 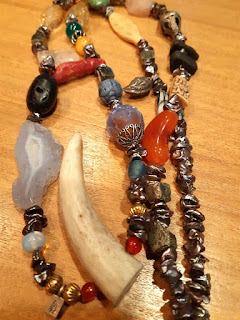 Ever since I started  making jewellery I have been told it is important to create a line. I was never quite sure just what that meant. Something common in each piece in the line? Technique? Materials? Style? Theme? 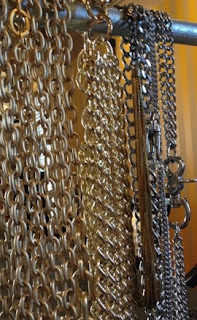 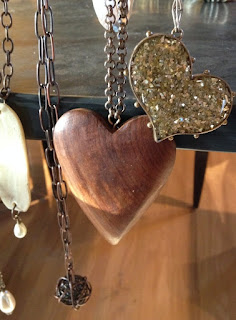 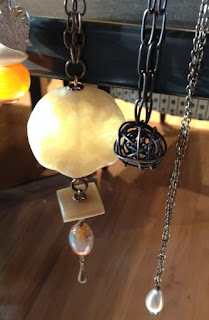 Beads with pendants, ethnic, boho, tribal, "Downton Abby", the list goes on and on. I am not sure I can limit myself to any one category but as I create and learn more I can see a common thread in my work.

I like pieces that tell a story, are time-worn, architectural, ...

These pieces are great alone or layered...... 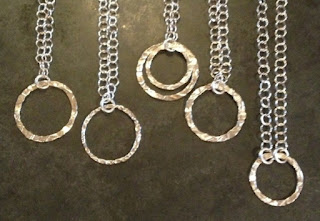 Maybe I will try them with a braided cord? or leather?

I am going to experiment with this idea of a line with a couple of conditions, I must love everything I make and it must all be something I would wear.

an interesting word with so many implications.


Living a life of luxury means something different for each of us. It may be a state of mind that influences our choices of what we buy, where we live and how we choose to spend our time. One way to indulge our sense of luxurious living is to surround ourselves with meaningful things. Our choices about food, fashion, art and jewellery are some of the ways that we can enjoy a sense of luxury.

Jewellery and art do not have to be high priced, to be luxurious. It must be well-made, well-designed and have a sense of style that sets it apart from all the others.  Local Handmade Luxury offers you art and jewellery that is made here in Calgary, by macmillanmarie Jewellery Design and by Natural Icon.

Jewellery may be a luxury but definitely an affordable luxury. And I believe that is the best kind.
Posted by macmillanmarie at 15:57 3 comments:

The Greatest Outdoor Show on Earth!

This year, the Calgary Stampede will run from July 3 to July 12. And like all stampedes, we will be attending the parade, eating lots of tasty food and listening to some terrific music. My family and I have many memories of free stage performances by singers like KD Lang, Ian Tyson and Reba McIntyre as well as some pretty clever magicians and some talented comedians, too.


We first visited Calgary in 1978. And during the next 5 years, we continued to make the long car trip from Regina to Calgary annually for the Stampede. We finally moved here in 1984. Our son and daughter grew up watching the rodeo and riding the midway rides. With lots of animals to see and so many exhibits to visit, the days never seemed long enough. It really is 'The Greatest Outdoor Show On Earth'.


The Stampede Parade soon became an annual event in our family. Early in the morning, on the first Friday of Stampede, the four of us would take the train downtown to stake out our piece of the pavement. The kids were always excited by the pre-parade fun, especially the clowns. The excitement would build as the parade made its way to us, through the streets of Calgary.


This year some friends and I will be starting a new tradition. On July 2, before the Stampede Sneak Preview opens at 6 pm, we will be hosting a show and sale of wonderful handmade products - some Stampede related - some not. So, why not join us for a good time and get an early start on enjoying the Calgary Stampede.


If you are in Calgary, or are nearby, we invite you to stop by the Wolf Willow Studio on July 2, between 1 pm and 9 pm. You can find us at 9 Spruce Centre SW, Calgary, Alberta T3C 3B7.


Drop by the The Stampede Show & Sale  for a great warm up to the Greatest Outdoor Show On Earth.


So much more to see!

The Story of a Necklace .... Final Installment 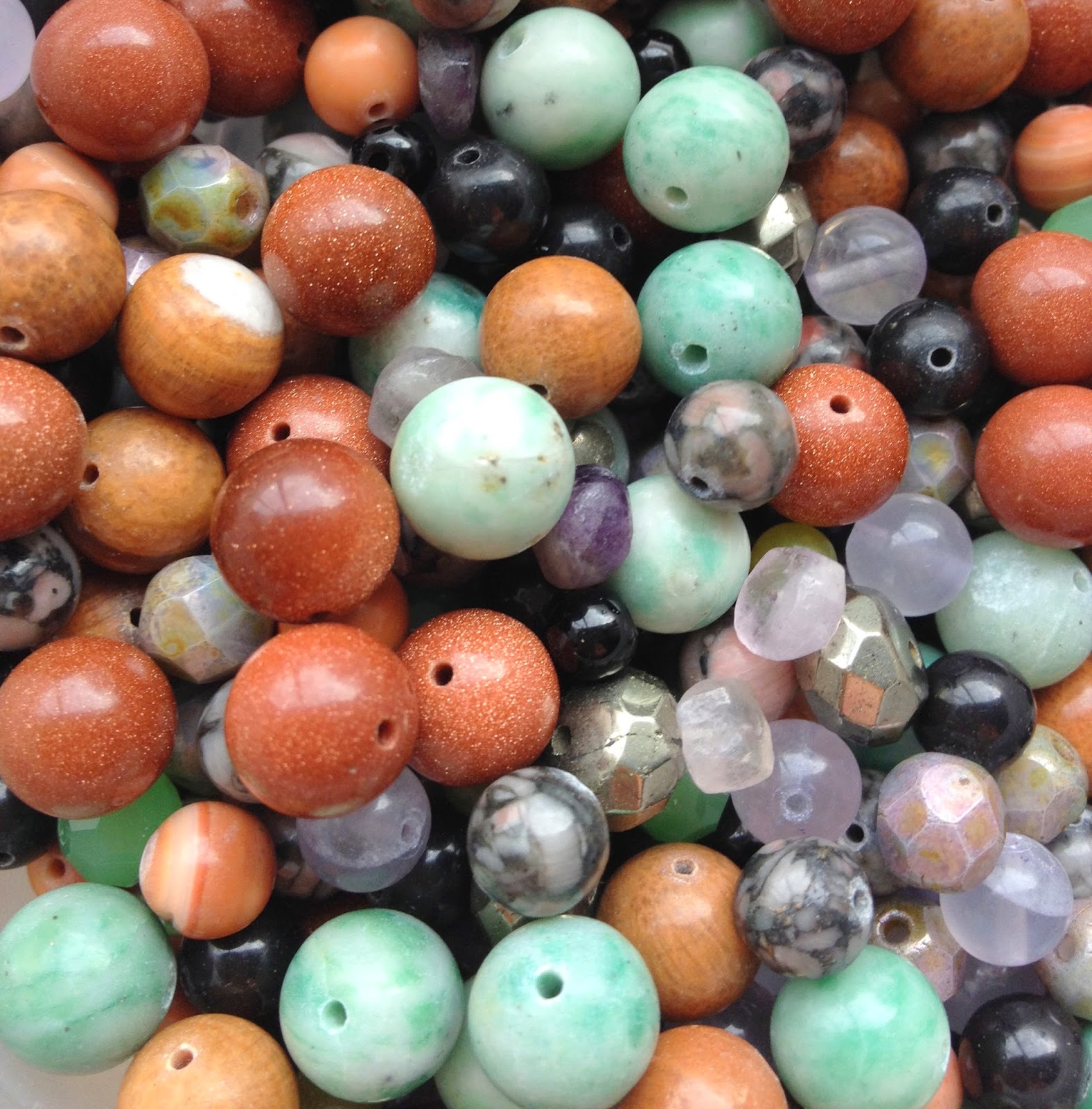 It is time to clean-up. Put the findings away. The extra beads, etc.... Sometimes I may take a chance and string the leftover beads randomly to see what I get. 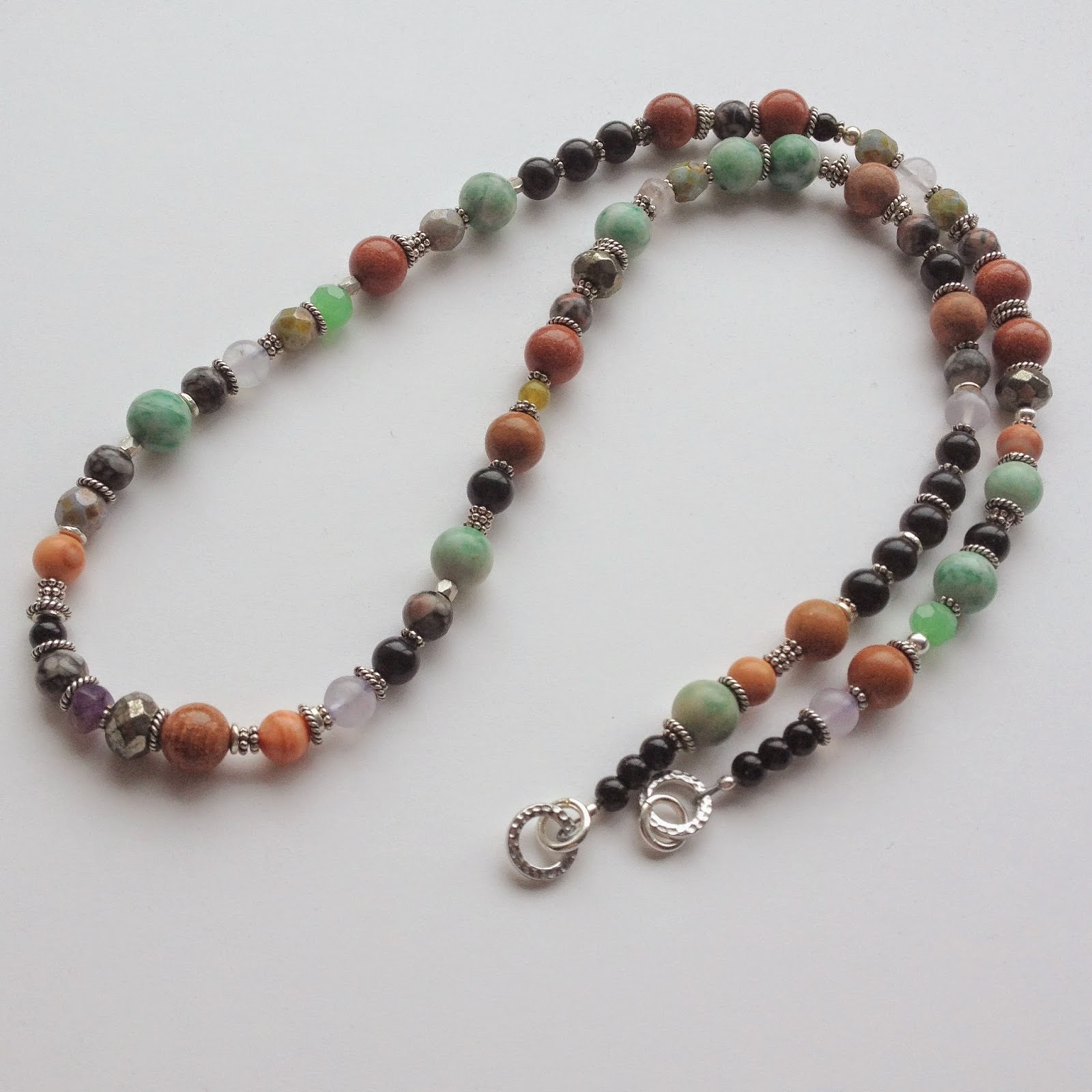 With the addition of silver spacers to some leftover beads I have created a simple single strand necklace that can be worn wrapped for a two-strand bracelet.


Next some earrings and maybe another necklace. Long this time - "Downton Abby" style.
Posted by macmillanmarie at 10:24 3 comments:

The Story of a Necklace ... continued part 3


After sifting through my stash and finding a collection that I think will satisfy my vision I can begin to put the necklace together.

I like to make sure my finished pieces are as strong as I know how to make them. Since this will be a relatively heavy piece I crimp each strand separately onto a closed ring - then I use jump rings to connect groups of strands onto the clasp. When done I have a beautiful 12 strand necklace composed of semi-precious gem stones as well as beautiful glass beads. I like the randomness of the piece very much. What do you think? 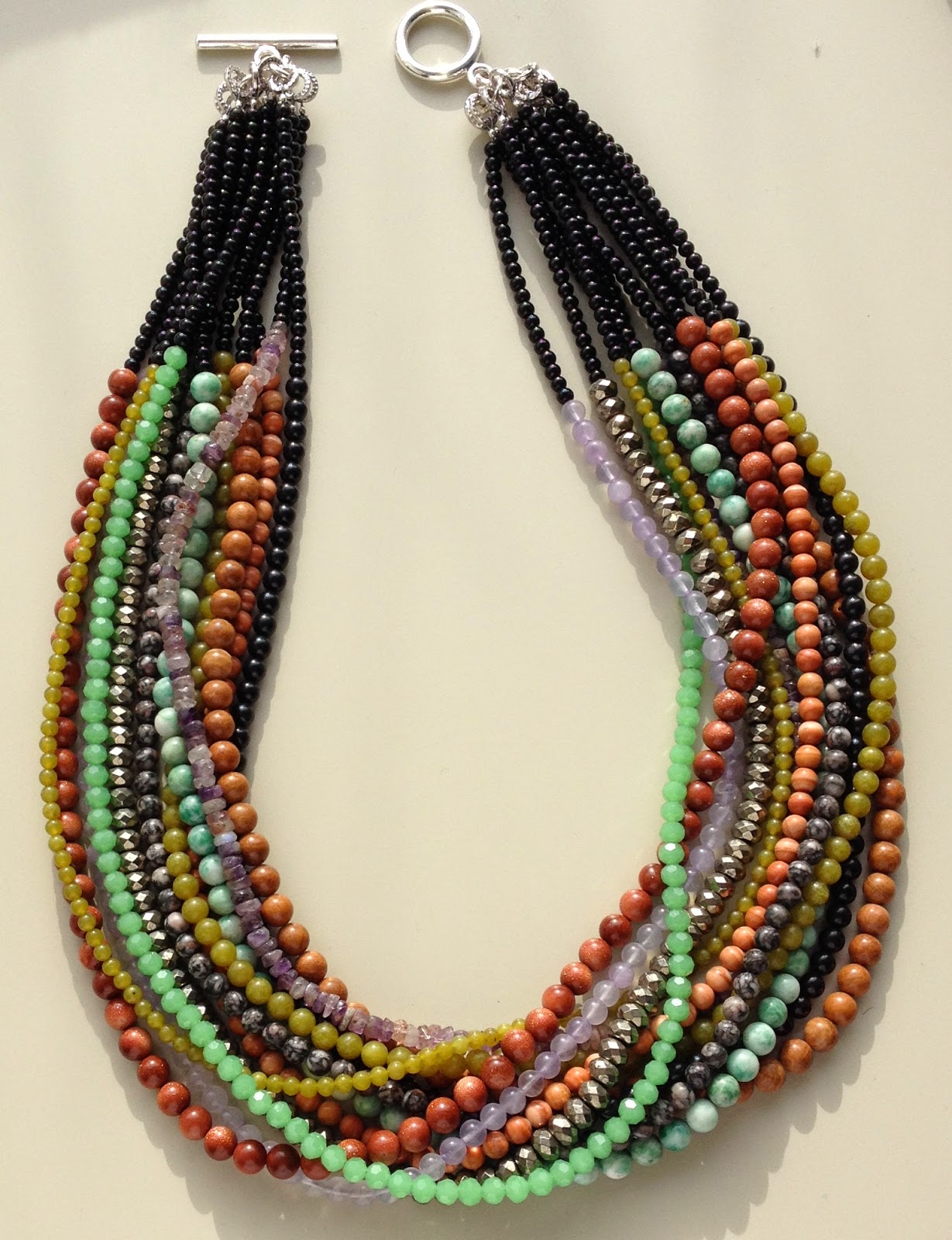 This is one of my favorite styles of necklaces. You can create many different options with this design.  The individual strands can vary in length or be all the same, you can mix your beads or keep them the same on every strand, the number of strands can vary - I am sure you get the idea.

Thanks for visiting.
Posted by macmillanmarie at 09:53 2 comments:

The Story of a Necklace... continues


I have decided to work with the multiple stands of glass and semi-precious beads. This is my starting point. 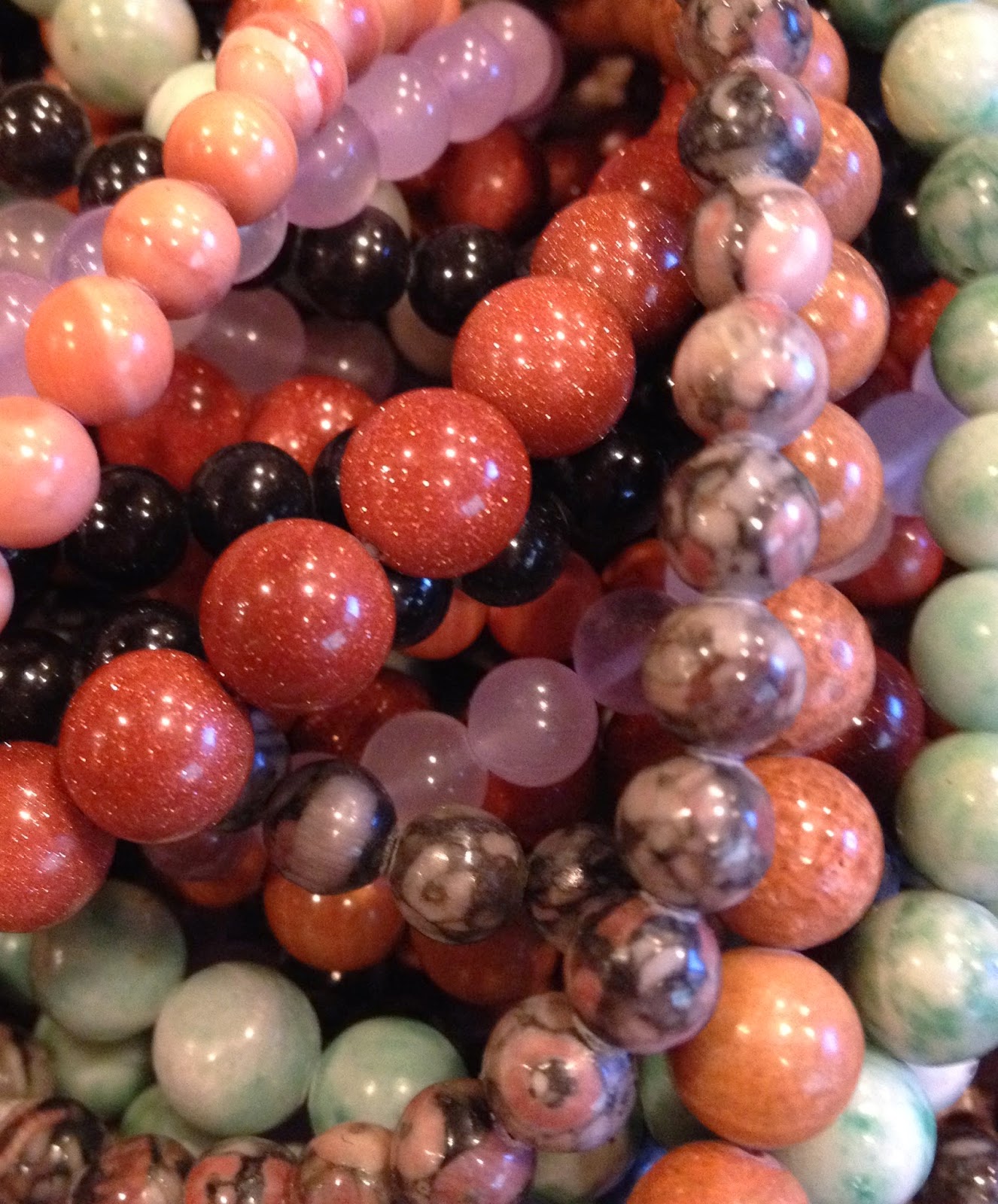 Here they are in a more orderly fashion. It may make them easier to see. 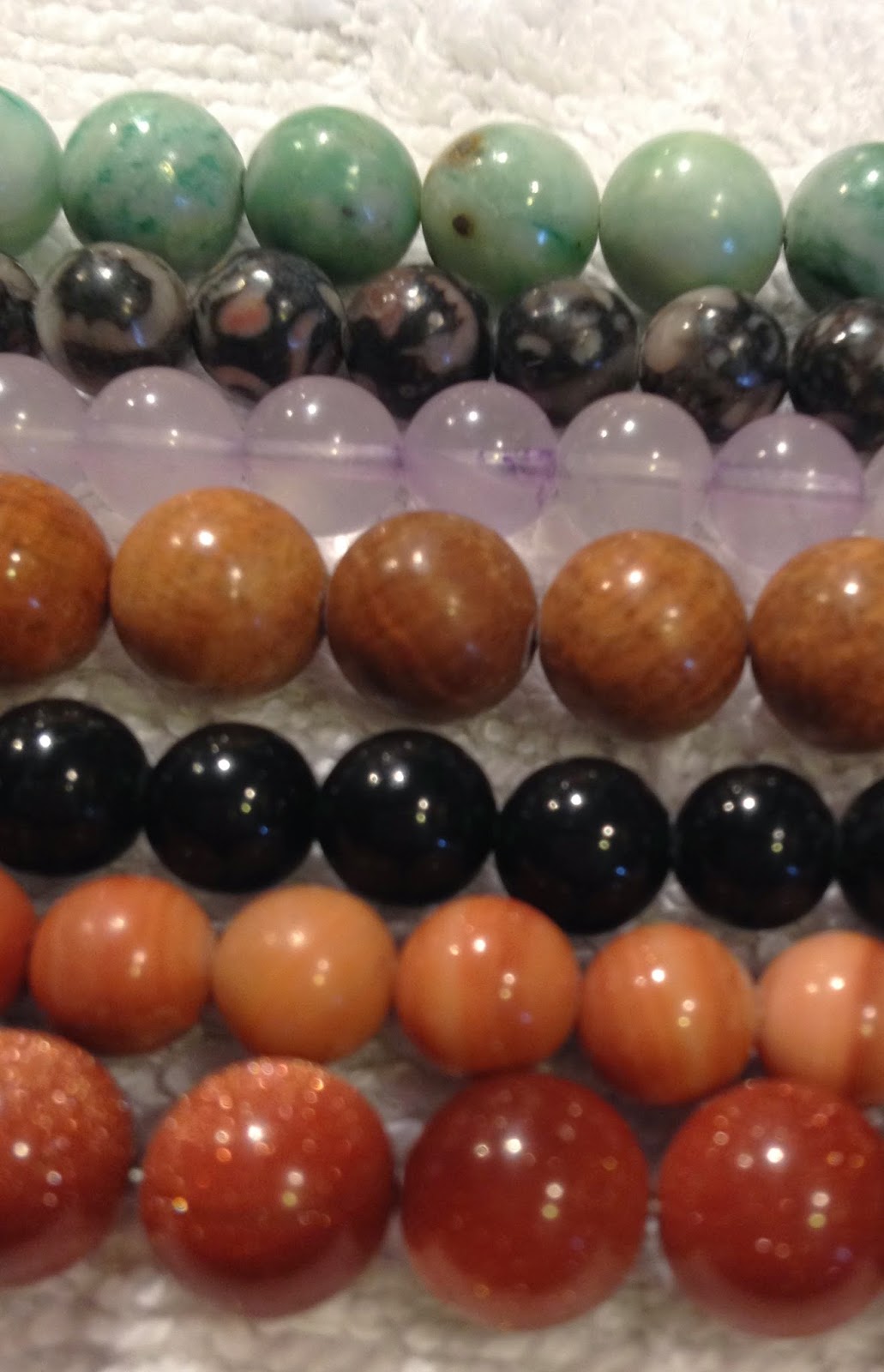 Now I need to go collect more "pieces" to the puzzle. I think this will be a simple multistand since the beads are all over the map. Let's see what I find.

Clasp? Findings?  I originally thought I would use gold tone findings but I was not finding what I wanted. 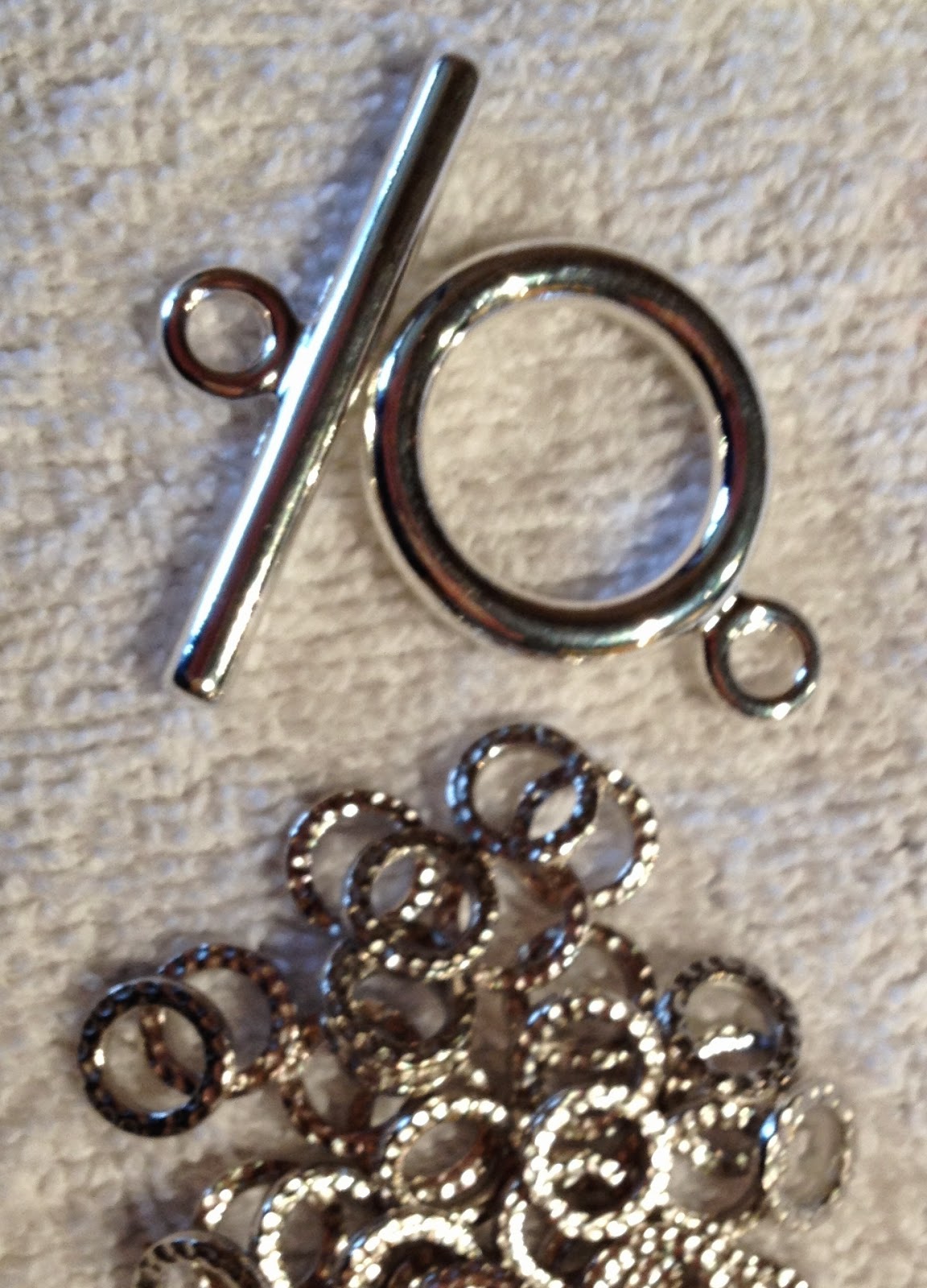 More beads? I like to have options when I go to put it all together. 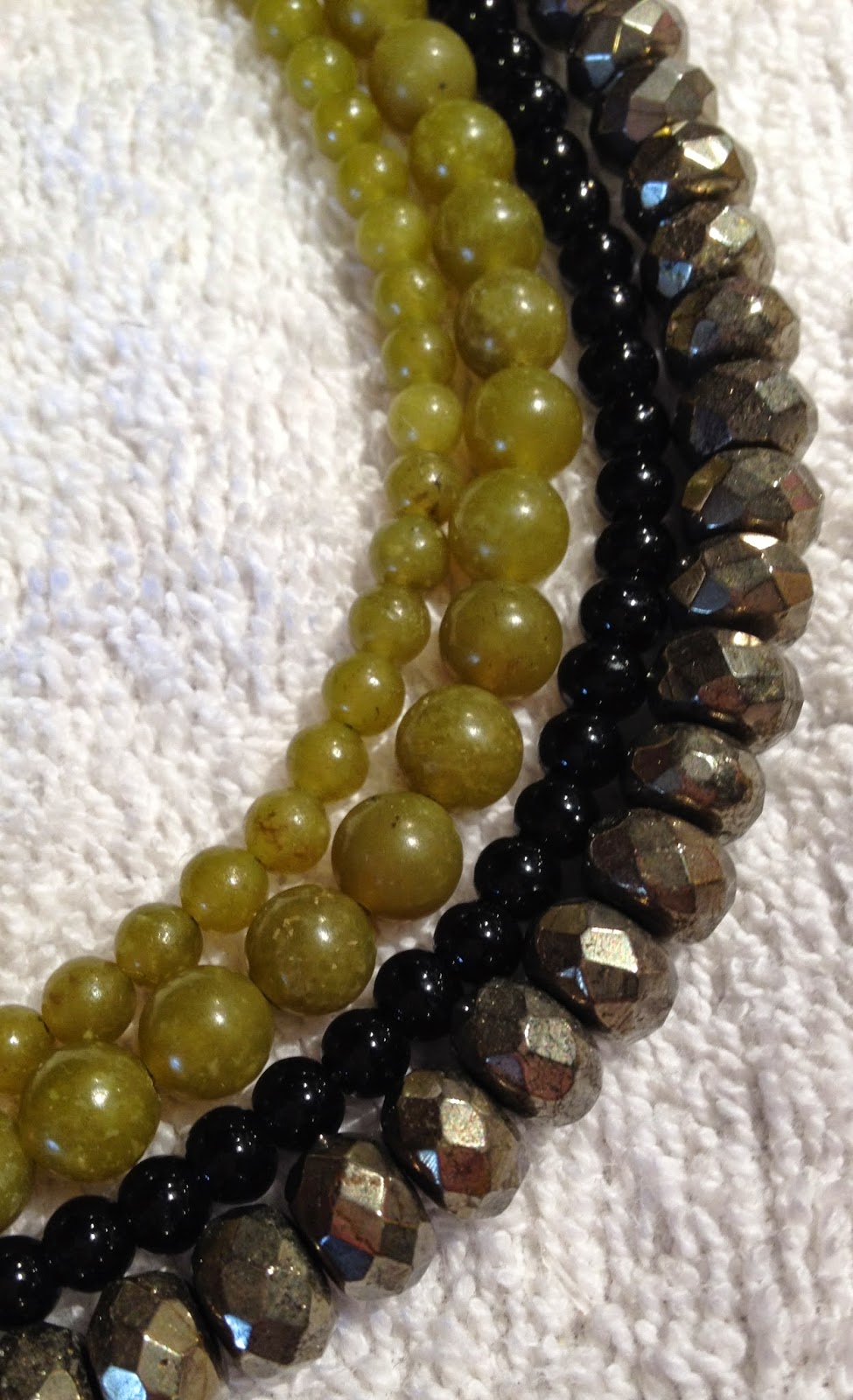 The extras include black glass beads, pyrite for sparkle and 2 sizes of dyed jade beads.